ecfirst has spearheaded security and compliance education through various seminars, presenting in major events organized by ISACA, HIMSS, CHIME and other industry alliances. We provide visibility to industry challenges, ways to manage them, and guide executives to achieve their strategic objectives.

The Strategy Workshop for Senior Management is a unique effort designed by ecfirst.

For speaking engagements, industry events near you, and guidance on developing a comprehensive security and compliance strategy, please email thoughtleadership@ecfirst.com. 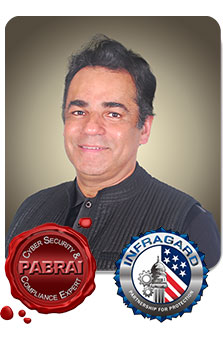 Ali Pabrai, MSEE, CISSP (ISSP, ISSMP), CCSFP, Security+, a cyber security and compliance expert, is the chairman and chief executive of ecfirst. A highly sought after professional, he has successfully delivered solutions to U.S. government agencies, IT firms, healthcare systems, legal and other organizations worldwide. Mr. Pabrai served as an Interim CISO for a health system with 40+ locations in USA. He has led numerous engagements worldwide for ISO 27001, PCI DSS, NIST and HIPAA/HITECH security assessments. ecfirst is an approved HITRUST CSF assessor.

Mr. Pabrai is the co-creator of the Security Certified Program (SCP) – a program approved by the U.S. Department of Defense Directive 8570.1M and one of the industry’s most comprehensive hands-on information security certification programs.

His career was launched with the U.S. Department of Energy’s nuclear research facility, Fermi National Accelerator Laboratory, in Chicago. During his career, he has served as Vice-Chairman and in several senior officer positions with NASDAQ-based firms.

Mr. Pabrai was appointed and servers as a member of the select HITRUST CSF Assessor Council.

Mr. Pabrai is a proud member of the U.S. InfraGard (FBI).